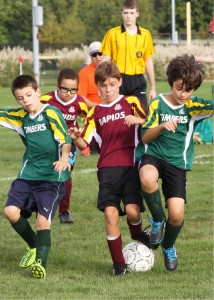 To referee in the DSL, please submit an availability form as well as an IRS W-9 form (Pre-printed forms for returning referees are mailed around Feb. 15th & July 1st)

Referees are an important part of the Dublin Soccer League program. They maintain safe play, witness and document events, and organize the flow of games. Referees are expected to take their assignments seriously.

Additional Rules that apply to all DSL games:

DARREE FIELDS: CLOSED to organized use of sports fields until April 6th